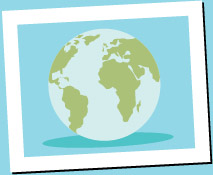 Only 3% of water on earth is fresh water. Water covers 70.9% of the earth’s surface, yet 97% of this water is salt water—making it unusable for human consumption. The fact remains that water is our most precious resource. People, animals, plants, farms, cities, and ecosystems all rely on fresh water sources for survival.

According to Water.org, 780 million people around the globe lack
access to clean water. This is 2.5x the population of the United States.1

Clean water is something we take for granted in developed countries. In other parts of the world, access to clean water can be a matter of life and death. Roughly 3.4 million people die annually from water-related disease.1 This is equivalent to the population of Los Angeles. Nearly all, or 99%, of water-related disease that occurs in developing countries is related to sanitation and hygiene issues. 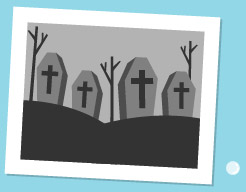 Water as a commodity is something we can all appreciate

It is the common thread that ties us together and
sustains life in countries around the world.2,3

Humans can only use three tenths of a percent of all water on earth. Flushing the toilet is the biggest water waster in America. 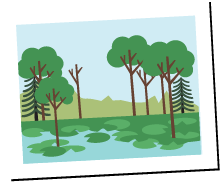 Visible water sources, like rivers, streams, ponds, and lakes, make up only 0.3% of the fresh water on earth. There is more fresh water in the atmosphere than in all rivers on earth combined.

The amount of water on earth totals at 326 MILLION CUBIC MILES.

Water as a resource cannot be produced by man.
Water is more precious than most of us realize.

According to EPA estimates, the average American family of four uses 400
gallons of water a day. Average water use is broken down per day as:

Roughly 70% of our average water use is consumed indoors, thanks in part to the modern convenience
of the toilet. Regularly flushing a toilet at home can consume up to 27% of total water use. 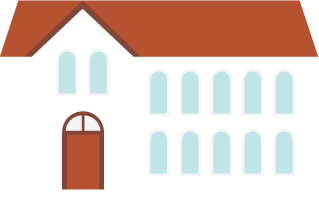 Upgrading household appliances, such as the toilet, is highly recommended to conserve water and save on utility costs.

Fresh water is used for daily household consumption, making up only 3% of all water on earth. Standing fresh water sources, like rivers and lakes, most commonly supply household tasks, like showering, flushing, cooking, and drinking. To prepare water for safe use, water must be processed through a treatment facility. Water treatments may vary by location, also depending on the quality of the fresh water source. 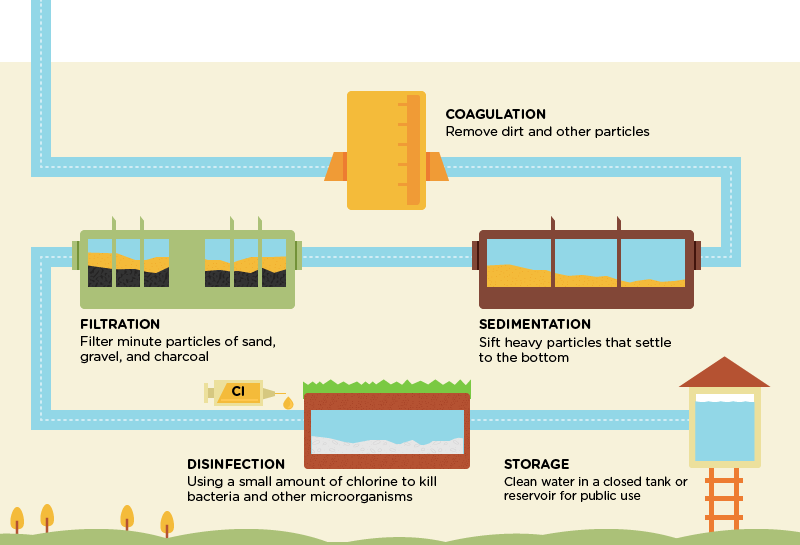 We often take water for granted, but it is vital to human life

Scientists consider water first when searching for life on other planets; where there’s water,
there might be life. Yes, water is critical to our survival, as well as the survival of animals,
plants, and ecosystems on earth. The human body uses water for digestion, nutrient
absorption, metabolism, and detoxification.

Life on earth could not exist without water

In the same way, water promotes life here on earth when used for irrigation, farming, sanitation, and power sources. As water covers the majority of the earth, it helps to regulate climate by absorbing heat in hot weather and releasing energy in cold weather. 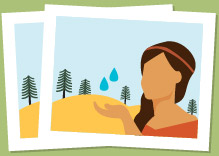 WHAT IS THE WATER CYCLE?

We know where our water goes, but where does the earth’s water come from?

Water on earth is constantly in motion

Water on earth is constantly in motion, in what is called the natural water cycle. This water cycle is also referred to as the hydrologic cycle, or H2O cycle. As most children learn in school, water in motion takes on three different forms within the cycle—solid, liquid, and gas. Water moves into these forms through evaporation, condensation, and precipitation.

The sun is the driving force of the water cycle

It heats bodies of water on earth. This causes evaporation. Water is evaporated as vapor into the air. This water vapor changes into solid forms like rain, ice, and snow; soon, these solids fall from the sky as precipitation to nourish plant and human life below. Water will fall into existing bodies of water or flow over the ground as runoff. Water absorbed by the earth will replenish underground freshwater aquifers.

Underground aquifers are water reservoirs made of
mineral and rock that naturally store fresh water. 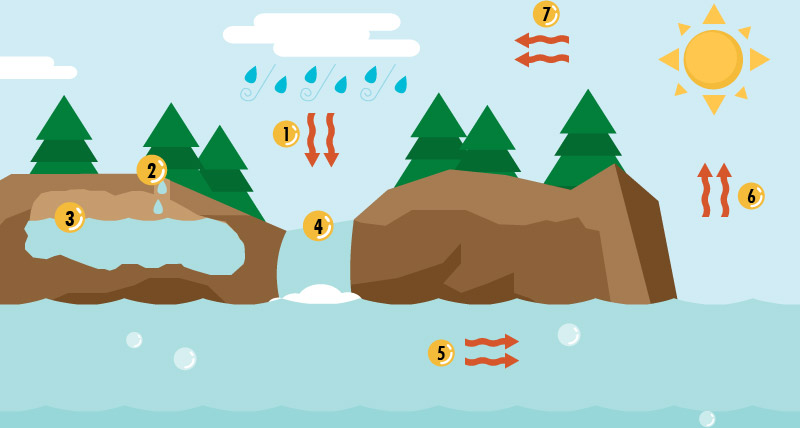 Mt. Waialeale, Hawaii, holds the world record for the highest annual rainfall at 450 inches a year.4

Once water reaches the ground, it must infiltrate the surface of the earth through soil and rock. The infiltration of precipitation depends directly on subsurface materials. Water may travel under the ground for long distances or fall into areas of groundwater storage before seeping into larger bodies of water.

Less absorbent types of soil, like clay, create larger amounts of water runoff—driven into nearby streams and rivers.

There’s much more to the earth’s water supply than meets the eye. Besides rivers, lakes, and oceans, there are significant sources of water underground. This groundwater flow supports stream and river water sources and can be used for irrigation and drinking water. Groundwater must remain in motion to stay within the water cycle; the speed, direction, and flow of groundwater will depend on aquifer and subsurface rock characteristics below ground.

Snowmelt or runoff contributes to water flow in the water cycle. Though some parts of the world never experience snowfall, snowmelt is a major driving force in global water movement. Mountain snow reserves in the winter serve as natural reservoirs for fresh water supply systems in the US; precipitation is stored as snow in colder months and will disperse naturally as snow melts into rivers.

Up to 75% of fresh water in the Western US comes from snowmelt.

Oceans are considered the storehouse for the majority of water on earth, containing up to 321 million mi.³ of the earth’s water (roughly 96.5%). Besides containing groundwater flow, the oceans are also responsible for giving back.

In the process of evaporation, water changes from liquid to vapor, or gas. Evaporation is the main vehicle that moves water back into the atmosphere, from liquid to vapor. As we just mentioned, oceans and other bodies of water, like rivers, lakes, and seas, contribute up to 90% of atmospheric moisture through evaporation. The remaining 10% comes from plant transpiration. Remember—the sun is the driving force of the water cycle. Energy from the sun heats bodies of water to cause evaporation. Evaporated water from the ocean keeps the water cycle moving to support much-needed precipitation on earth.

Water evaporates from plant leaves into the atmosphere through transpiration.

Precipitation delivers water directly back to earth to sustain life. 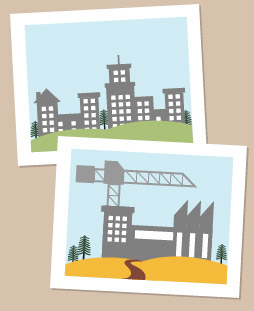 The steps in the water cycle

They are used to describe how water remains constantly in motion, changing forms and shifting through the hydrosphere. The hydrosphere on earth encompasses the combined mass of water found on and underneath the surface of our planet. With changes in weather and rain clouds on the horizon, it may seem like water moves quickly. However, water often remains in the groundwater phase for extended periods of time; this stored water underneath the surface can periodically stop moving or move slowly until it reaches a large body of water.

As humans, we constantly disrupt the water cycle

Activities like farming, industrial development, urbanization, dam construction, deforestation, groundwater extraction from wells, and pollution all affect the efficiency and quality of the earth’s water cycle. 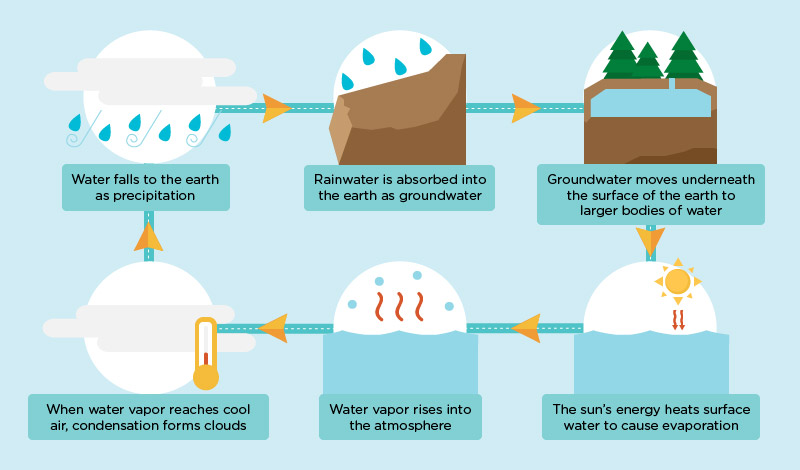 The best way to understand and appreciate the water cycle is by doing. Use these easy
steps to create a mini water cycle with your kids to see our planet’s water in motion.5 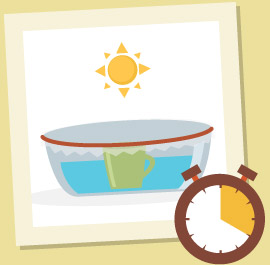 This mini water cycle will give you a first-hand glimpse at how water moves through this process on earth. After the bowl has been snugly covered with plastic wrap, drops of condensation will start to form in the sun. These large drops of water on the plastic wrap will drip back into the bowl and coffee mug below. If you would like to speed up the condensation process, cooler temperatures help; carefully move the bowl with water into the shade without splashing into the coffee mug.

“We forget that the water cycle
and the life cycle are one.” 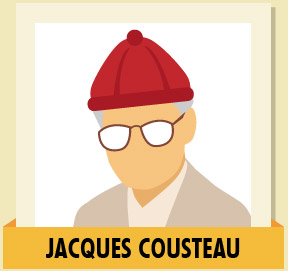 While the water cycle may be something that you
learned about in school years ago, it’s easy to forget
how this process keeps our planet beautiful, green,
and thriving. The next time that you enjoy a
refreshing rain on a summer afternoon, remember where it came from. Water evaporated from the ocean into the atmosphere to create rain clouds. Rain fell to earth to nourish life—and the cycle starts all over again.