History of the Tractor 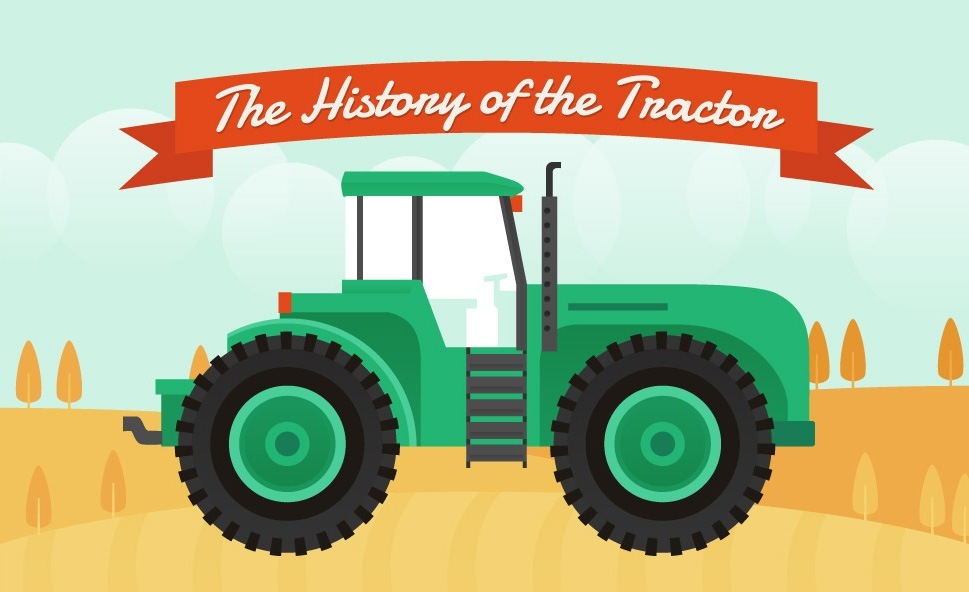 How the Tractor Changed Farming in America

How much thought have you given to the great American tractor? If you have food on your table, you have the tractor to thank for it. While most of us will never see the inner workings of a farm firsthand, we can still appreciate the purpose and power of the tractor that brings America’s food supply from farm to table.

Froelich’s steam-powered thresher left much to be desired. The machine was cumbersome and difficult to transport. Its basic use was costly, and it was also considerably dangerous—just one spark from the thresher boiler could set fire to a prairie on a windy day.

In 1890, Froelich embarked upon a new design. He and a blacksmith worked side-by-side to mount a one cylinder gasoline engine onto the thresher steam engine’s running gear. Froelich was pleased to find that this rudimentary tractor could be drive safely at roughly 3 mph. Froelich and his crew brought the new machine on their annual harvest tour with successful results. The first tractor required only 26 gallons of gas and threshed over 1000 bushels of grain a day without any safety issues.
Froelich expanded to create the Waterloo Gasoline Traction Engine Campany in 1849 with four prototype tractors. Froelich later branched out on his own, while Waterloo continues to produce tractor designs in the early 1900s. Waterloo Tractor Works is now owned by John Deere. 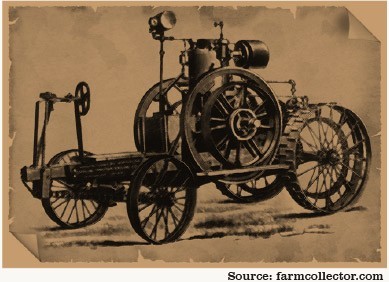 Thank goodness for the invention of the tractor. Froelich brought a new working concept into agricultural America. He streamlined tedious processes to save farmers precious time and money spent on unnecessary manual labor. 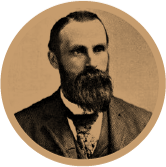 Froelich was born in Iowa in 1849. Froelich was more than familiar with the American agricultural industry at the turn of the 19th century; he operated a mobile threshing service and grain elevator. He charged farmers a fee to thresh their crops at harvest time with the help of his crew and a steam-powered thresher machine. 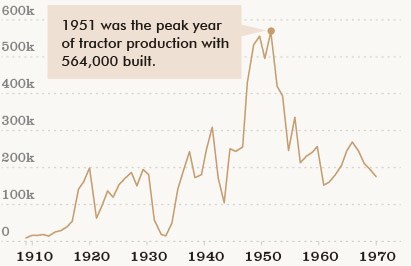 Within the first few decades, tractor use was slow to catch on. Yet once farmers realized the benefits that could be had in tractor-driven farming, popularity soared. There was no need for cumbersome manual labor when a simple machine like a tractor could do the job for you. From 1910-1970, tractor production drastically increased from 1000 tractors to nearly 5 million.
Falling prices contributed to tractor to tractor growth. Early tractors cost as much as $785 in 1920. Just two years later in 1922, a tractor could be purchased for only $395. The price dropped by nearly half in just two years, making tractors an affordable piece of agricultural machinery for almost every farmer.

Tractor farming just made sense. Farmers saw
immediate benefits in tractor use, like:

Rural farming populations decreased as tractor use increased. In the 1940s, tractor use peaked; due to social changes brought on by World War II, farming communities experienced drastic shifts. 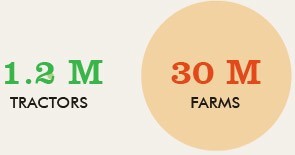 At the beginning of the
war, 30 million people
lived on farms with 1.2
million tractors in use.

Tractor use jumped to
4 million by 1950,
while farm populations
dropped to 23 million. 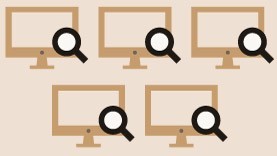 It only takes a quick Google search to confirm the continued popularity of tractors in agriculture today. In the U.S. alone, tractors are searched 5 million times a month.

“Dorothy Bell Belin, daughter and wife of farmers, remembers when her father first bought his tractor for $1000. It was a Farmall, and her father had the support of her mother for this purchase. Bell did not sell his horses but kept them and bought more. Farming was easier with the tractor, but ‘it cost money to operate. You had to buy the gasoline. That was a problem.‘” – The Tractor Changes Rural Life, Anna Carlson

Based on search popularity, the top tractor
brands in America are ranked as:

John Deere is hands-down the top tractor company in the U.S., established in 1868. In the U.K., John Deere also reigns supreme, followed by Massey Ferguson and Ford. There is strong evidence to suggest that John Deere is the number one global tractor brand today as it also corners the top tractor search results in Australia and Canada.

We’ve only scratched the surface of American tractor history. Read on to learn more about how tractor development shaped farming in the U.S.

“None of the first tractors had a battery in them,” LeRoy says. “You had to crank the Farmall… We had it standing out in the yard there one time. Our boy was about four years old. And I was in the house for something. And all at once the missus says, ‘You know, the tractor is running.’ And the boy come in the house, never said a word… He just took a hold of that crank and turned it one notch. Everything was just right, and it started.”

– Farming in the 1930s, livinghistoryfarm.org

Tractor pioneer John Deere created the first self-cleaning plow made from an old saw; John Deere began mass-producing his newly popular saws instead of making them on-demand, a customary practice for blacksmiths at the time.

The Otto internal combustion engine was patented by German inventor Nicholas Otto. When his patents expired in 1890, manufacturers worldwide began to develop and sell machinery powered by Otto engines.

The Waterloo Gasoline Engine Company was incorporated by a group of businessmen, and Froelich was named president. Froelich’s interest remained in tractors instead of the production of stationary engines; Froelich soon stepped down as company president. 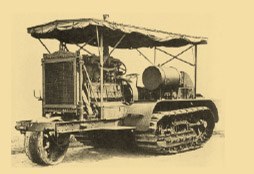 A Holt steam traction engine was used in the construction of the San Francisco cable car system. 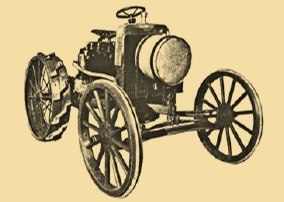 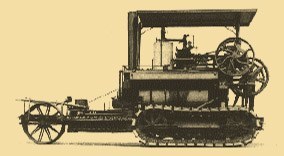 Holt Caterpillar track-type tractors gained popularity after their use in the Los Angeles Aqueduct Project. 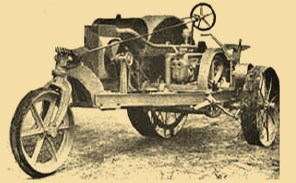 The Bull Tractor Company introduced the first tractor manufactured for small farmers. Standard features included a single “bull” wheel, a two-cylinder 12 hp engine, and a cone clutch instead of a transmission gearbox. 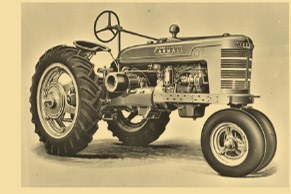 The Farmall tractor, a light-duty, all-purpose, row-crop tractor advertised to “farm all,” was produced by International Harvester. According to The Big Book of Farmall Tractors, the Farmall revolutionized power farming in the U.S.

John Deere was able to survive the Great Depression by focusing on product development; Model A and Model B tractors remained the most popular Deere models in company history, produced until 1952. Caterpillar Inc. also experienced growth through the Great Depression.

The number of large farms in America grew, replacing smaller family farms. Farms could no longer operate with just one tractor; the average large farm required several tractors for production.

1960Four-wheel-drive tractors were introduced within the decade. Caterpillar expanded to manufacture in Brazil, which continues to the present day. 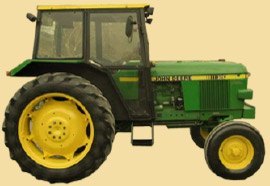 The best-selling John Deere tractor of all time, the John Deere 4020, hit the market. Farmalls remained the top selling row-crop tractors until 1963.

An agricultural depression swept the nation. Nonetheless, John Deere was responsible for producing 38 different tractor models within the decade. The company managed to stay on top as other major competitors merged or went out of business.

John Deere improved the farming trade by manufacturing revolutionary row-crop tractors, never before seen by the agricultural industry. In the same year, farmers began to manage crops and tractor use with GPS receivers to regulate water, fertilizer, and pesticide use.

Industry experts endorsed the transition to driverless tractors in the near future. Major manufacturers, including John Deere, supported developments in autonomous machinery design.

In 2012, the idea of the self-driving tractor launched. 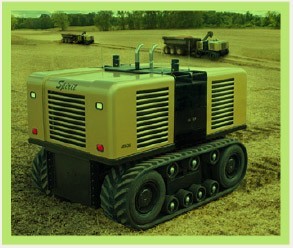 The autonomous tractor is only one piece of the puzzle in impressive, modern-day tractor technology.

Other top tractor innovations to improve American farming include: 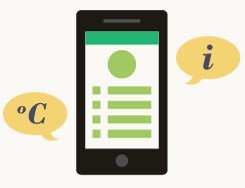 Today, there’s an app for almost any farm function related to tractor use. Smartphone apps can be downloaded to manage irrigation and grain storage systems. App management can support tractor use and efficiency by monitoring insect pest levels, herbicides, temperature, and even soil type via GPS. 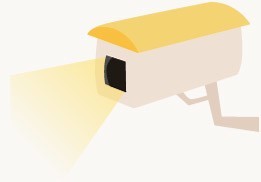 Camera surveillance is one smart way to improve the use of farm equipment. Cameras can be mounted on a property to cut down on vandalism and theft; cameras can also be mounted directly on tractors to reduce blind spots and improve visibility for safety purposes. 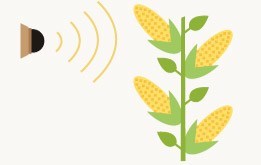 Crop sensors can communicate with application machinery to determine how much fertilizer to apply in real-time; benefits include more effective fertilization, maximum uptake, and reduced runoff into groundwater. 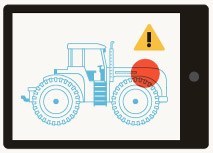 New tractors are built with updated telematics technology that allows the equipment to “speak” to the farmer or dealer. Telematics provide more intuitive diagnostics to better assess an equipment malfunction on the spot.

Tractor sales have yet to slump.

With the latest agricultural technologies and innovations hitting the market year after year, tractor use is multipurpose and widespread. U.S. farm tractor sales hit a five-year high in 2013, according to the Association of Equipment Manufacturers. 24,171 farm tractors were sold in May 2013.

The many benefits of the modern-day tractor are hard to deny. What once started as a rudimentary piece of farming equipment has transformed into a landmark piece of agricultural machinery. Tractor technology offers: 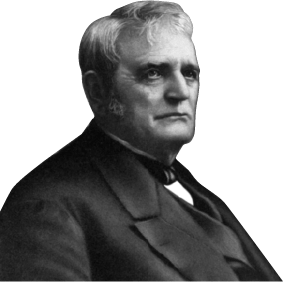 We can attribute the success of the agricultural industry and the slowly growing American economy to the pride tractor manufacturers take in their craftsmanship. As the man behind the industry’s leading tractor brand stated so eloquently:

I will never put my name on a product that does not have in it the best that is in me. – John Deere